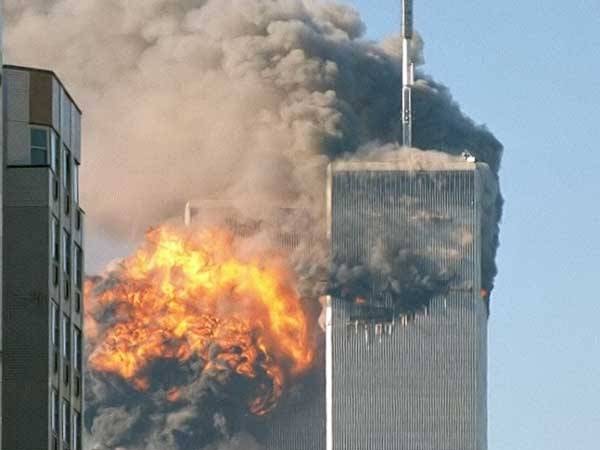 Have you ever been through a natural disaster like a tornado, hurricane, forest fire, etc?

I Cannot Get This One Vision Out of My Head…

The 9/11 remembrance ceremonies always make me cry.   I always feel those same emotions I felt back on that Tuesday morning way back when.

There is this thought that has always stuck with me and it is the idea that the first responders were running up the stairs of that building while citizens were running as fast as they could away from the danger.  I that moment when they should have been following their survival instinct they did the exact opposite and ran to help.

And most of them were climbing the stairs to their inevitable death.  They didn’t know they were going to die, but I suspect many of them sensed this event was different and the level of danger must have felt different.

As they climbed the stairs, many on the floors above the impact zone were jumping to their deaths.  Many took one last deep breath of smoke to commit suicide instead of burning alive.  All the while they climbed.  Step after step, floor after floor, they climbed.

The thought that these men and women climbed those stairs passing people who were trying to escape haunts me.  I can feel those emotions and I hate it.

Each year I remind myself of those men and women who climbed slowly to their deaths carrying equipment, oxygen tanks and bags of cutting tools.

They ran into danger while normal people were running away.

I will never, ever forget.

How often do you clean your house?

Where were you when the planes hit the Towers?

Do you still honor those lost on 9/11 or has it become just another day?  If you honor the day, what do you do?

I divide my life into two distinct categories-my memories prior to 9/11 and life that existed after 9/11. I could not watch today without reliving the emotions of that day as I have every year since. As it is difficult to believe 15 years have passed it is even harder to believe there are college kids who only know of this day through the images that replay and the stories they’ve heard.

Life moves quickly. But for me time seems to stand still when I watch the images from that day. As if my emotions have been stored forever in a capsule that is opened each time I watch the events unfold. They are fresh just as they were that day. The pain is still real. The fear is still there. The overwhelming sadness still robs my soul of compassion.

I want to tell those jumpers that everything will be okay. But I know that is a lie. I’ll try to imagine the desperation they must have felt. The burning pain that must have existed to convince them the only solution was to jump. I want to catch them and hold them. But I cannot.

I still battle the demons inside that wish death of those who perpetrated the attacks. I want them and everyone like them to suffer. But I also know this is not going to bring those who died back to life. So I cry this morning watching the replay as I have every single year since that day. I’ll think about how life is different now compared to then. I’ll thank God above for my wife and family. And then on Monday morning I will go to work and my life will start up once again. I guess that is how it is supposed to go. I guess this is how it is supposed to be.

Question of the Day:

I did not post my thoughts on Friday for the 9/11 memorial.  Every year I have paid my respects to the men and women that lost their lives that day by watching the replay of that morning in its entirety.  This past Friday was no exception.

It always brings back the emotion in its exactness and always puts life in perspective.  Life in the United States has changed dramatically since that day and I am sure will continue to change for quite sometime.  I hate seeing the people jumping from the Towers, I hate seeing the people running for their lives, I hate watching the buildings collapse.  It makes me sad, angry and motivated.

Many times in life it takes some type of ultra-emotional event to prompt us to take action.  Whether it is a heart attack that convinces us to finally shed a few pounds or someone we love breaking off a relationship which causes us to see we need to work on our interpersonal skills.  Emotion is a great starting point for achieving a goal or making changes in our lives.  It can prove to be an incredible force that can alter the course of life.

Here are a few things that came from my 9/11 remembrance this past Friday:

So many people died that day leaving kids, wives, brothers, sisters, moms and dads all alone.  I am certain they would trade anything to have a few moments with their loved one; to hear their voice or see them smile.

I encourage each of my readers to keep life simple and remember what is truly important.  Your bills will get paid at some point and I would hate for you to miss the last moments with a loved one because you were too busy fretting over trivial things.