Sometime during July, I was taking some landscape photos around Brundage Point River Park in Grand Bay. There were two sculptures and I decided to using them as points of reference and scale in my photography. I was just being a tourist, play around with my camera settings.

I had checked out the tourist information office and read on an interpretive plaque that  there had been a fire that destroyed a large number of home in the town in early 1900’s and the dedication plaque was in Unity Park.

On August 1921 A forest fire raged though West Field, leaving 55 families homeless with no loss of life. This memorial placed by the town of Grand Bay Westfield in the year 200

I located the fire dedication, and right beside it was another sculpture. This one was called Love. Now my curiosity was piqued; I… 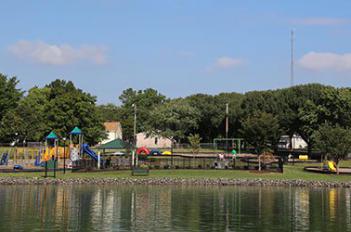 Evelina and I are headed to the lake at the park soon with Bentley.  He loves the ducks and turtles!  Plus it’s nice to get outside and walk a bit.

I was uninspired yesterday so I thought I would free associate a few random thoughts I have had lately:

That is what’s going on in my head!  I hope everyone has a great Thursday!